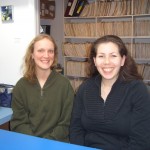 We are saying goodbye to Medical Office Assistant Kimberly, who is leaving us this week for new frontiers.  We wish Kim the best of luck and it was wonderful to have you work for the Galiano Health Care Society.  Alex  is returning to us from maternity leave, and will be back at the front desk starting April 4th.  Lori and Jackie will also staff the desk, so please have a smile for these women who work very hard for all the patients at the clinic. 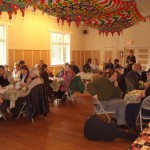 On Sunday March 27, the Galiano Health Care Society held a tea at the South Hall  in appreciation of the many volunteers who donate time and energy to offer the best possible health care on the island. We were entertained by Jenny Sterling and Dan Elmes as well as Diane Laronde. Thank you to all the volunteers and let it be known that we are all very grateful to you. 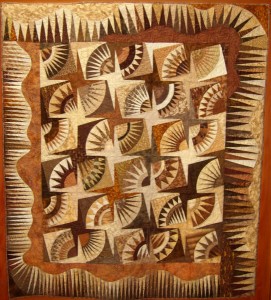 This beautiful New York Beauty Quilt is 66” x 76” and has been created by the Galiano Needle Guild. Raffle tickets went on sale on April 15 and the draw took place on August 13th. This was to raise money for the Galiano Health Care Society.

Bonnie Robson won the quilt. Bonnie has been a supporter of the Galiano Health Care Society for many years. Congratulations Bonnie and thank you to all who bought tickets to support your local health care. 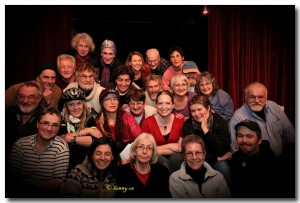 Cast of Galiano's Got Talent

I hope you were one of the people in the two sold out shows on the 12th and 13th of February that witnessed the fantastic and often hilarious talent Galiano islanders offered to the community as a fundraiser for the Galiano Health Care Society and Centre. The diversity of acts was impressive. We were at Studio 54 with Ginga’s original electro-funk, a smoky jazz bar with Genny Laronde, stand-up at Yuk-Yuk’s with an autobiographical genius version of her new life as Trustee with Sandy Pottle, and getting a glimpse into the underbelly of Galiano’s social life with Speed Dating Galiano Style.

These are just a few of the wonderful acts that came out to support health care on Galiano and gratitude is what we feel for their efforts to entertain and support us all.

The Health Care Society would like to thank the organizing dream team of Sylvie Beauregard, Jackie Bowers, Margaret Howell and Johanna Newmoon who ensured we saw a quality show from start to finish. We would also like to thank the following individuals and businesses for their support and hard work, without which all this fun and fundraising would not have been possible:

We raised a little over $3000 for health care, quite an achievement. Thanks to all who attended, and enjoy these photos of the show provided by Henny Schnare with much thanks. 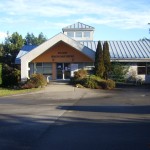 As noted in last month’s Active Page article, medical care on Galiano before the 1980s was carried out  by visiting doctors  from other islands or by semi-retired resident doctors working out of their own homes.  Whether your illness or accident coincided with the presence of a doctor on island was a matter of luck.  In 1984, a group of residents organized themselves with the aim of creating a more permanent location for the delivery of health care here, and finally in 1991, after much energetic fundraising and leaping through of bureaucratic hoops, the present Health Care Centre was opened.

As the early organizers had hoped, the building has over the years been used by a variety of health care professionals, including the doctor, locums whenever a doctor was unavailable, the nurse practitioner, the lab technician, and also by a dentist, hygienist, chiropractor, podiatrist, massage therapist, and a physiotherapist.  A fully equipped emergency room and a helipad are maintained at the clinic; the  latter has made it possible to get severely injured or ill patients to big-city hospitals in a fraction of the time it would otherwise take.
Money to support the running of the Health Centre has come from rents paid by health care providers, by gifts, bequests and society membership fees, and by various fundraising events, including the annual wine festival. In the early years enough money was raised to construct and equip the clinic, and also to create a small reserve against a rainy day.  As years went by, greater demands were placed on the Society’s means as uses of the space multiplied (increasing wear and tear) at the same time that  the building began to require more maintenance because of its age.  Also, there are new Health Department requirements for medical clinics,  making new equipment and more staff hours necessary,  increasing costs. Furthermore, as residents struggle with the present economic situation, donations have dropped.

Supporting the successful running and maintenance of the clinic and other educational and community programs, as well as the purchasing of medical and dental equipment (expensive stuff) on the Society’s slender income was always an ambitious undertaking.  In recent times a series of events  have created greater financial demands and  made coping increasingly difficult.

Dr. Beaver’s departure did not create the crisis, but it did render the precarious nature of the situation suddenly very evident.  Dr. Beaver  paid rent, and also the costs of a pager, fax, telephone, and salary and benefits for the Medical Office Assistants.  The Society suddenly not only did not have the rent coming in (Locums, by VIHA regulations, cannot be charged rent), but, since MOAs and telephones and so on are still required to run a clinic, the Society has had no choice but to pick up these expenses except for the one day of MOA salary subsidized by VIHA when the nurse practitioner is present.   Furthermore, the dental hygienist has retired, and the dentist has been on sick leave, so that rental income is consequently very much reduced.

What has the Health Society been doing about this? A committee of the board have been in negotiations with VIHA for several months in an effort to have VIHA cover some of these costs which have been created in the absence of rental income from a  resident doctor..  After considerable correspondence VIHA indicated that they would do so,  more paperwork has been signed, processed and filed, and hopefully a cheque will arrive sometime before the Health Society’s finances hit the wall.
The Board has also discussed with the CRD the possibility of having a levy added to property taxes to pay for basic operational and upkeep expenses at the Centre.  Up to this time the GHCS has  been entirely community-supported, never receiving any tax or other government funding.  The process of  acquiring tax support is lengthy.  First a request, with much supporting documentation, is made to the  CRD, which will then conduct a study;  if deemed reasonable, the matter could go to referendum to be voted on by residents of Galiano, in this case probably next November.  Should the referendum pass, no funds would be raised until the following year ( late 2012).  Future boards would be able to function with the certainty of being able to meet some of their basic costs, and focus their fundraising proceeds on purchasing and replacing equipment, improvements to the structure, and delivering educational and  community programs.  Mayne Island, with a similar population to Galiano’s and a Health Centre built a few years before ours, has had tax support for the maintenance of their Centre since 2007.

The other matter of which the public needs to be aware  is when there is medical care available on the island, and when there is not..  I’ve heard people say that they haven’t gone to the clinic because they don’t know whether there will be a doctor.  In fact there has been almost complete coverage by locums at the clinic since Dr. Beaver’s departure.  Presently,  locum coverage has been booked  till March 4.  The rural locum program is administered by the province, and through VIHA renews coverage every three months.

Evening and weekend coverage is a somewhat different story. The locums provide evening coverage on the weekdays that they are here (except Friday  evening). Two weekends a month, there is a nurse  but no physician on call on weekends.  In February the weekends covered by nurses are February 4/5/6 and 18/19/20. This means that there are two full weekends, including Friday evenings, when we do not have local emergency coverage. This has to do with the way  that rural emergency coverage is administered . When Doctor Beaver was here, he, together with the Mayne and Pender doctors, formed a group which shared the funding allotted to provide this coverage, Dr. Beaver providing his share of it on Galiano.  Since we presently don’t have a doctor, we also do not have any Galiano-based funding for an emergency physician.  When we do find a doctor, presumably a similar arrangement to Dr. Beaver’s will be reached with him or her.

What all this means is that unless the cavalry come riding up very soon, the Society will be starting to live off its financial reserves; it has been saved from having to do this so far only by the assistance of a couple of other Island organizations and by a private bequest.  When the Society is no longer able to cover salaries and running costs, the Health Centre will be obliged to cut services.  In view of the Ministry of Healths’ increasingly stringent regulations, it is unlikely that medical practitioners would be operating out of private homes as they did in the old days, and a modern  emergency room under those circumstances would be an impossibility.

What can the public do?

First, use the clinic. Last summer, VIHA attempted to reduce the Galiano doctor’s position to part-time with the rationale that the clinic was underused.  To find out what services are available at any time, phone the Centre at 3230; even when the clinic is closed, clear directions as to your alternatives will be left on the answering machine. Current information has now been posted on availability of services on the island’s public bulletin boards, and will be updated regularly.  Soon this information should also be available online.
Support the Society.  Become a member.  Attend fundraisers.  Write letters.  Many battles have been fought and many, many volunteer hours have gone into the effort to provide excellent and consistent  health care for you here on Galiano.

If the matter of tax funding supporting the medical centre does come to a referendum, think seriously about what the services provided to this community by the Health Centre mean to you, your family, your visitors, and perhaps to your business. The amount added to the average property tax bill  would scarcely buy you lunch for one at the pub…once a year!

To end on a positive note, there has been some interest in the position shown, and at present VIHA is in discussion with a serious applicant. Galiano’s Got Talent Variety Show at the South Hall. Come and enjoy seeing residents of Galiano strut their struff for the benefit of the Galiano Island Health Society. There will be dance, comedy, music, skits and more. 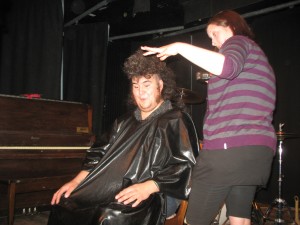 Matthew Morgan shaves his mane in support of the GHCS